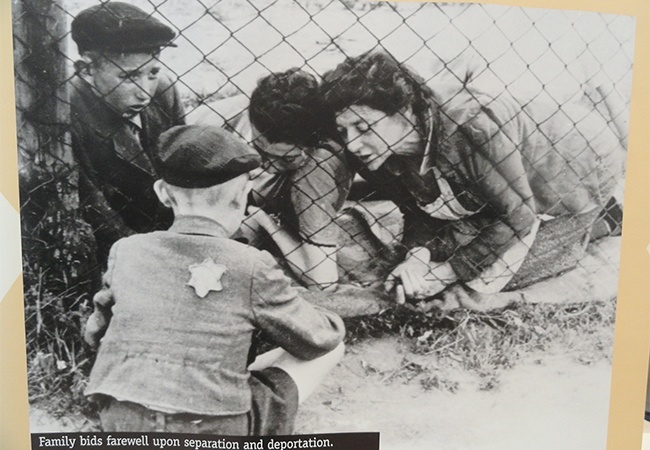 The exhibit uses images taken during the Holocaust and the killing of Jews in Eastern European ghettos. 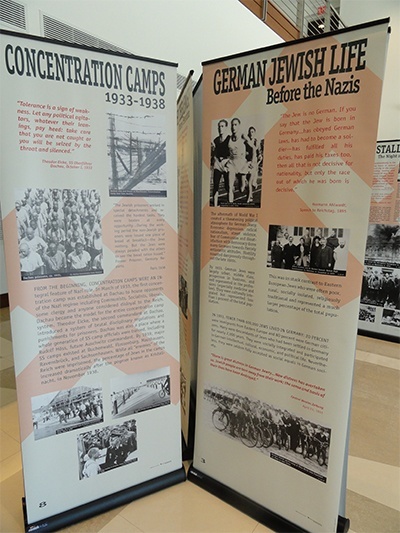 Information on concentration camps that is part of “The Courage to Remember” exhibit.

FORT LAUDERDALE | As the nation marked the 50th anniversary of Martin Luther King’s “I have a dream” speech, students at St. Thomas Aquinas High School listened to another moving talk.

This one was delivered by Cantor Emil Levy, who described his imprisonment in a Nazi concentration camp during World War II and how he was liberated at age 16.

“We are all God’s children,” Levy said with deep passion. “I’m standing before you as a leftover, an unfinished work of Hitler.”

His message clearly hit home to the more than 250 high school students in the audience, ages 14 through 18. 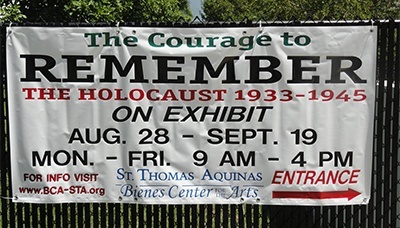 “The Courage to Remember,” a Holocaust exhibit whose goal is to end bigotry and prejudice, is on display at the Bienes Center for the Arts across the street from St. Thomas Aquinas High School through Sept. 19.

And that is precisely the goal of “The Courage to Remember: The Holocaust 1933-1945,” an exhibit which opened Aug. 28 at St. Thomas Aquinas’ Bienes Center for the Arts. Its goal is to end bigotry and prejudice.

The traveling exhibit is produced by the Simon Wiesenthal Center’s Museum of Tolerance and presented by the Foundation for California. Created 20 years ago, the exhibit has been on display in a number of countries including Canada, Mexico, Argentina, France, Great Britain, Austria, Brussels, and Russia.

Wiesenthal, who died in 2005, was a survivor of the Nazi death camp Mauthausen in upper Austria. When the camp was liberated on May 5, 1945, he was barely alive. He dedicated his life to documenting the atrocities of the Holocaust, and hunting down the individuals responsible for those crimes.

“The Courage to Remember” exhibit is not just about the Holocaust. It’s about what’s happening in the world today: how everyone is responsible for our fellow human beings, that injustice is not to be tolerated, and that “life is so very precious,” said Florida State Rep. Gwyndolen Clarke-Reed. 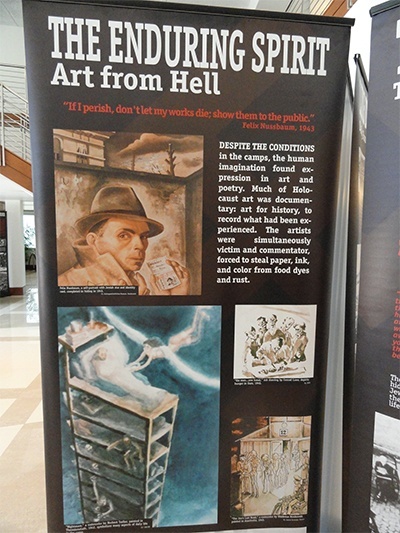 Art created in and recovered from the concentration camps can be seen in “The Courage to Remember” exhibit.

Clarke-Reed was one of a group of dignitaries who attended the opening. Others included U.S. Congressman Ted Deutch, Broward Sherriff Scott Israel (the first Jewish sheriff in Broward), Florida State Rep. Richard Stark, and cantor Levy, CEO of The Flame Society, whose mission is “to teach the lessons learned from the Holocaust … to ensure that mankind will never forget.”

The packed auditorium was told that bullying is the birth of social oppression.

Rep. Clarke-Reed discussed the challenges of segregation while growing up in Delray Beach. When she was younger, train rides were segregated. She was not allowed to even go into the dining car; her lunch was given to her in a little box. She emphasized, “Injustice to one is injustice to all.”

Msgr. Vincent Kelly, supervising principal of St. Thomas Aquinas High School, explained that the focus of The Bienes Center for the Arts is to bring quality national and international exhibits that “benefit the faculty, the students, the parents and the community.”

When Ted Gover from the Foundation for California reached out to the school over a year ago to host the event, Msgr. Kelly agreed. He said this particular exhibit is in line with St. Thomas Aquinas’ philosophy of “reflecting the truth in everything.”

“This is our desire to make a contribution to the community at large,” Msgr. Kelly said.

He explained that he was born in Europe, “in the age without reason,” and where “leadership in countries was destroyed” due to the war.

That time in history, he said, was “a destruction of a people.” He explained that with this particular exhibit, he is not trying to minimize other Nazi atrocities, such as the murder in the death camps of priests and nuns, the mentally and physically disabled, gypsies, and others they determined as inferior.

His hope for this exhibit is that it changes minds. He explained that so many people, especially the younger generation, don’t truly realize how serious the Holocaust was, and how bigotry and hate was unstopped.

Wiesenthal, in his memoir, quoted an SS corporal, “You would tell the truth (about the death camps) to the people in America. That’s right. And you know what will happen, Wiesenthal? They won’t believe you. They’d say you were mad. Might even put you into an asylum. How can anyone believe this terrible business — unless he lived through it?”
God is first, Msgr. Kelly said, “but self respect is the next important thing. The respect for others. The respect for personal dignities regardless of race, religion or economic situation.”

He added that everyone must “learn from the past so no one suffers in the future anytime or anywhere.”

Or as Simon Wiesenthal put it, “Hope lives when people remember.” 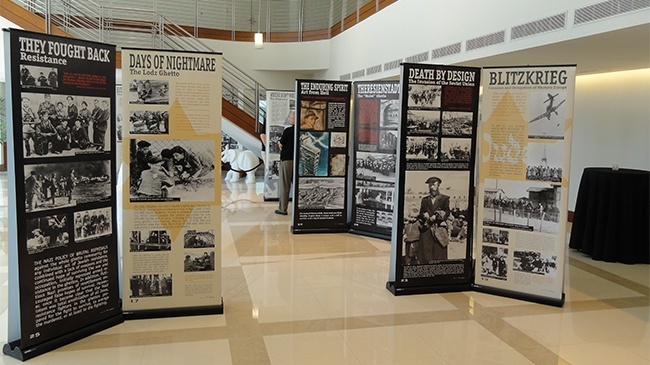 View of “The Courage to Remember” exhibit in the lobby of the Bienes Center for the Arts.